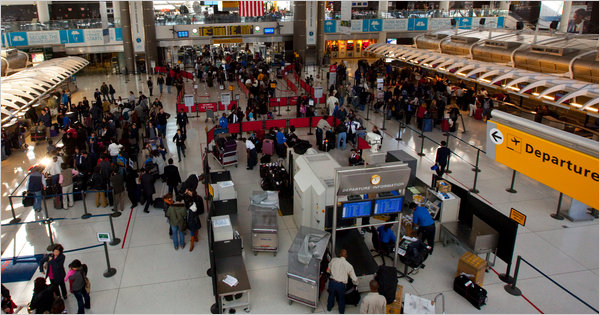 Uli Seit for The New York Times
John F. Kennedy International Airport on Sunday. An advocacy group argues that the anger against airport security procedures is an expression of travelers’ overall attitude toward air travel.

“Air travel used to be glamorous and exciting — and now, it’s just a pain,” said Mary C. Gilly, a marketing professor in California.

The airlines have already taken away the free meals and the pillows. They have been charging for checked bags and extra legroom and raising fares whenever they can get away with it. They have been packing more people onto planes as they slashed the number of flights scheduled each day. And passengers now have fewer options if bad weather cancels or delays their flights.
Now, just in time for the Thanksgiving holiday — traditionally the busiest time of the year — the Transportation Security Administration has imposed tough new security measures.

And that may have been the last straw for many travelers.
Judy Dugan, the research director at Consumer Watchdog, an advocacy group, argues that the anger that has welled up against the new security procedures is an expression of fliers’ overall attitude toward air travel.
“Passengers are angry and frustrated about most of the flying experience — the whole ‘shut up and sit down’ experience of flying,” Ms. Dugan said. “But unless they’re professional travelers, they can’t pin the frustration on individual airlines. It’s easy, though, to focus on the T.S.A., which is a big and omnipresent part of every flight for everyone.”

And don’t expect any change for the better anytime soon. While many travelers may complain about their travel experience, the industry for the first time in years has found a way back to profitability by holding the line on the number of flights they offer.
United States airlines scheduled 526,000 flights in September, according to the Air Consumer Travel Report, down from more than 600,000 in September 2007. And each flight is now fuller. Load factors, which measure how many seats are filled by paying customers, have risen above 80 percent on average at most airlines and will probably be 90 percent or more over the holidays. Only a few years ago, airlines were achieving load factors of 70 percent.

Just between Chicago O’Hare International Airport and La Guardia Airport in New York, American Airlines and United Airlines scheduled 1,400 fewer flights in the first nine months of this year compared with the same period three years ago, a drop of 17 percent.
Fees are also piling up. Bag fees, for instance, brought in $1.7 billion in extra revenue in the first half of the year. In many cases, passengers are paying for services that were once free. Changing a ticket on US Airways, for instance, now costs $150 to $250; sending an unaccompanied minor on a Delta Air Lines flight, $100. Pet charge on Southwest, $75; an alcoholic drink on United, as much as $9.

“Air travel used to be glamorous and exciting — and now, it’s just a pain,” said Mary C. Gilly, a professor of marketing at the University of California, Irvine. “Airlines have become very cost-oriented as opposed to service-oriented. They are catering to their investors, not their customers.”
More problems may be on the horizon, some experts say. New federal rules have pretty much abolished instances of planes sitting on the tarmac for more than three hours. But the rule, which went into effect in May, may have had the unintended effect of forcing more flights to be canceled, some airline experts say.

Airlines said they have a strong incentive to comply with the tarmac rule given that the potential fines of $27,500 per passenger could end up costing around $3 million per delayed flight. But as a result, airlines have been canceling flights that they expect may face a long delay. When a plane returns to the gate to avoid the three-hour penalty, there is also an extra chance it will get canceled.
From May to September, the last month for which data is publicly available, only 12 flights remained on the tarmac more than three hours. That compares with 535 in the same period last year. But more flights were canceled in the same period, even as airlines reduced their overall capacity. Even so, airline experts say it is too early to determine whether the rule has benefited customers.

“We haven’t gone through a big winter yet,” said Brett Snyder, the author of the Cranky Flyer blog and the president of Cranky Concierge, an air travel assistance Web site. “We need those long snowstorms that mess things up to know the impact of the rule. I think we need to wait.”
With fewer flights, though, travelers could end up waiting for hours at the airport, or even spend the night there, without any compensation for the inconvenience if bad weather delays operations.
Weather, in fact, more than security checkpoint delays, may turn into the bigger headache of the holiday period.