Airport security plan in the works for DNC 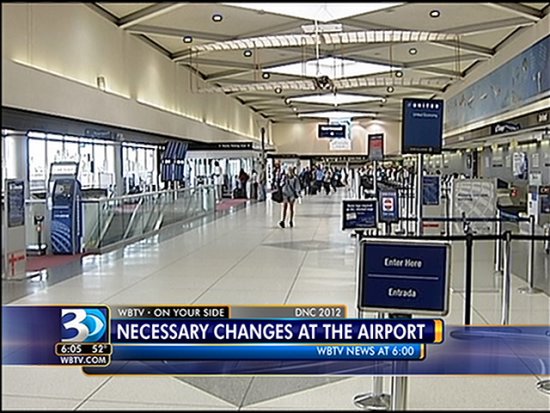 Airport safety plans are not yet set in stone for next year’s Democratic National Convention, but some of the appearances at Charlotte Douglas will be visible to the naked eye, and other security issues connected to the 2012 DNC are being handled behind the scenes.

In recent days, duties at the curb and inside the terminal have been farmed out to private companies.
By the time DNC delegates and thousands of the party’s faithful arrive in Charlotte, expect to see a much greater presence of local, state and federal law enforcement personnel near the ticket counters and right on the street.
Last Month, CMPD Chief Rodney Monroe told the Mayor and City Council, that potential gaps exist in the infrastructure at Charlotte Douglas.
“You’re talking 19 miles of perimeter around the airport,” he said.
Monroe’s words came after more details emerged regarding how Delvonte Tisdale, made his way on to a plane before being found dead in a Boston suburb.

“There are certain areas that are more vulnerable than others, and that’s where we’re going to focus our attention.”
Before President Obama or any other dignitary gets to town, something else will be happening away from Time Warner Cable arena.
Expect more cops at private landing facilities like Wilson Air and the military will keep an eye on the things at the Air National Guard which has been a landing spot for Air force One.
During the week of the convention, F-A-A employees will also control much of the airspace around Charlotte.
It will not be business as usual for local airlines, because in many case the skies will be in the hands of air traffic controllers.
Beyond CMPD, but more 40 police agencies and sheriff’s departments that are taking on the DNC assignment.
That doesn’t include another 40 private security firms that are on the list as well.