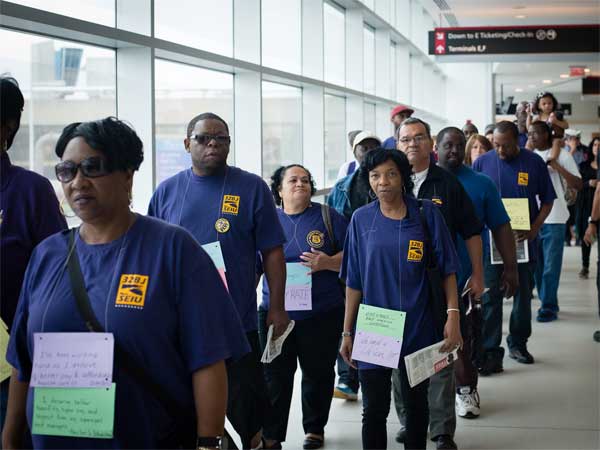 Chanting “Enforce Now!” and “Poverty wages don’t fly!” about three dozen Philadelphia International Airport workers stormed the hallway outside the mayor’s office this morning with a single demand: enforce Nutter’s executive order upping the minimum wage for contractors and subcontractors doing business with the city to $10.88 an hour.
The group was largely comprised of Local 32BJ of the Service Employees International Union (SEIU), whose members ranged from security checkpoint officers to baggage handlers. They never got any mayoral face-time, but Chief of Staff Everett A. Gillison did come out and address the crowd.
Gillison had just wrapped up testifying before City Council’s Committee on Commerce & Economic Development when the airport workers began to crowd chambers, then made their way to the mayor’s office. Their main gripe was that it’s been three weeks since voters passed the minimum wage hike at the polls, but PHL International contractors and subcontractors claim they have yet to see that extra money.
“Many are now hearing that it will be some time before the mayor’s executive order is enforced in their various workplaces,” said Bishop Dwayne Royster, executive director of POWER interfaith organization and pastor of Living Water United Church of Christ.
“We’re concerned that people are still working full-time, living in deep poverty here in the city of Philadelphia, and the administration has the power to be able to enforce this right now. We ask that the mayor enforce his order immediately and make it binding with all parties that are in contractual or sub-contractual relationships with the city of Philadelphia so our workers can begin to feel some economic relief in their communities.”
Gillison reassured the airport workers that the city is moving forward with implementing the executive order.
“As contracts are being remade and re-negotiated for a new term, we’re making sure that everyone understands their responsibilities under it. We’re trying to get it done as quickly as we can,” he said.