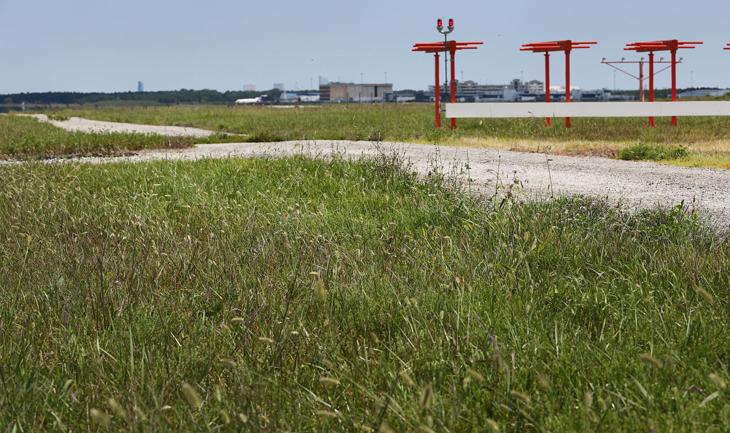 Friday August 15 2014 Grass and weeds are allowed to grow near runway areas to discourage birds from interfering with aircraft at Atlantic City International Airport in EHT. (The Press of Atlantic City / Ben Fogletto)
EGG HARBOR TOWNSHIP — Overgrown weeds and grass at Atlantic City International Airport may give the impression the lawn mowers are broken or the groundskeepers have been laid off.
But the airport’s unkempt appearance is part of a strategy to outwit some bird-brained intruders. Airport officials want to discourage birds from congregating on the sprawling property and creating a danger for aircraft.
The tall vegetation on parts of the airfield is seen as a deterrent because birds like to survey their surroundings. One bird expert says they avoid high weeds, because they fear predators could be hiding nearby.
“It’s certainly true that larger birds, like geese and gulls, don’t like the fact that predators, including foxes, could be lurking there,” explained Mike Crewe, program director for the Cape May Bird Observatory. “The other problem for them is, if you think of geese or gulls, they are short-legged for the bulk of their body, so walking through that type of vegetation is cumbersome.”
So far this year, there have been 25 bird strikes with aircraft at the Atlantic City airport. None resulted in any injuries or serious damage, according to the South Jersey Transportation Authority, the state agency that owns the airport.
Overall, the Federal Aviation Administration reports there are more than 10,000 airplane bird strikes a year in the United States. Globally, wildlife strikes have killed more than 250 people and destroyed more than 229 aircraft since 1988, the FAA says.
In recent years, the best known case of an airplane bird strike is the “miracle on the Hudson,” the forced landing of US Airways Flight 1549 in New York in 2009. Canada geese ingested in the jet engines caused the plane to lose power and ditch into the Hudson River. The crash was labeled a miracle because no one was killed.
Knowing that bird strikes could be catastrophic, the South Jersey Transportation Authority and the U.S. Department of Agriculture are using a number of tactics to keep geese, gulls and other feathery interlopers off the Atlantic City airport grounds.
Flocks of birds descend on the 5,000-acre airport site to forage on the insects that are abundant this time of year. But the transportation authority has a contract with the Department of Agriculture to make the airport inhospitable for birds, including setting off fireworks or even shooting them if they become a serious nuisance.
“Wildlife harassment techniques are implemented as needed, including loud noises or pyrotechnics. When necessary, birds are taken in accordance with the airport’s bird depredation permit,” said Kevin Rehmann, a transportation authority spokesman.
Rehmann could not immediately say just how many birds have been shot this year or what types. In previous years, the airport disclosed that hundreds of birds have been killed, particularly the aggressive laughing gulls that often appear in large numbers.
Crewe said he hopes the airport kills birds only as a last resort. He would like to see a compromise that allows the birds to forage and nest on the airport grounds, as long as they don’t pose a danger to aircraft.
“I would say it’s unfortunate,” Crewe said of sharpshooters killing the birds. “I would say it should be a last recourse when you try everything else.”
Other airports across the globe have struggled with bird populations. Some have used dogs to patrol the airfield for birds. Others have relied on trained falcons to chase away intruders. Crewe said one airport in Europe has been experimenting with a robotic peregrine falcon, created from a 3-D printer, to fly around the grounds as a bird deterrent.
Strangely, the roar of jet engines isn’t enough to scare the birds. Crewe said the birds simply have adapted to the noise and are unfazed by the planes. So they persist.
“They get used to it. That’s the long and short of it,” Crewe said. “They’ve come to think, ‘This thing’s kind of noisy, but it doesn’t harm me.’’’
Gulls and other birds come to the Atlantic City airport from their breeding grounds in the salt marshes of the Edwin B. Forsythe National Wildlife Refuge about five miles away in Galloway Township. Insects found at the airport are a tasty morsel for the adult gulls and their chicks waiting back at the nests.
Years ago, the airport grounds were mowed very short, similar to a golf course. But that attracted Japanese beetles. The beetles like shorter grass for their egg-laying. Swarms of beetles would then attract flocks of gulls and other birds looking for food.
But since 1993, airport officials have been allowing the grass and weeds to grow high during the summer. The hope is that there will be fewer beetles for the birds to snack on, forcing them to bypass the airport to search for food elsewhere.
Rehmann noted that the grass and weeds will be mowed once the summer growing season is over. Although large sections of the grounds remain overgrown, mowing continues near the runways, taxiways and other areas of the airport where navigational aids for aircraft are located.
*****************************************
California Aviation Alliance: Airport News List E-mail
Sent by AviaEd@AIM.com – Lorena de Rodriguez on behalf of CAA subscribers. Add your comments to these stories realtime online at  http://aviaed.wordpress.com/.