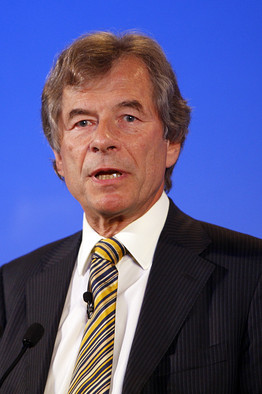 APBA chairman Martin Broughton
British Airways Chairman Martin Broughton, who’s not known for avoiding conflict, is causing even more of a rumpus than usual.
Speaking at the annual Airport Operators Association conference, Broughton hit out at the U.S. over its security demands that he describes as “completely redundant,” and, as if that wasn’t enough, he adds that the U.K. should stop “kowtowing” to their every request, especially when the same checks weren’t imposed on its own domestic routes.
“America does not do internally a lot of the things they demand that we do,” he said. “We shouldn’t stand for that. We should say, ‘We’ll only do things which we consider to be essential and that you Americans also consider essential,’” the Financial Times reports.
He said the traveling public shouldn’t be forced to take off their shoes or have their laptops checked separately. Those rules were imposed after “shoe bomber” Richard Reid hid explosives in his shoe on a trans-Atlantic flight.
He said there were also inconsistent approaches to iPads with some airports treating them as laptops, while others didn’t force passengers to take them out.

“Everyone agrees passengers need to be safe and of course it’s the government authorities who set the requirements.”

He said BAA could do a better job if “we could sit down and agree from scratch the best security arrangements.”
He added that removing shoes and laptops could be an irritation but also “uncomfortable” for some passengers who may not be able to bend down easily.

“Ideally we would have exactly the same requirement across the whole of Europe.”

Not unreasonably he added that it would also be much better to have a common agreement on both sides of the Atlantic.