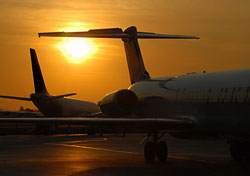 The Associated Press (AP) reports that the Federal Aviation Administration (FAA) has ordered airlines to inspect the cockpit window heaters on some 1,212 Boeing aircraft, and possibly replace the windows as well.
The order comes after a lengthy investigation into numerous incidents, ranging from cockpit fires to shattered windshields to a form of electrical discharge know as arcing. Several of these incidents have resulted in emergency landings.
Advertisement

The AP reports that the source of the problem, a loose screw that chafed the window heaters’ wiring, was first noted in 2004. Since then, the National Transportation Safety Board (NTSB) has been urging the FAA to order airlines to replace the windows with a new design that uses pins instead of screws. The FAA order actually falls short of that request by only requiring inspections initially, with replacement to follow if defects are discovered. Airlines also have the option of replacing faulty windows with a design similar to the current version, rather than the new version that uses pins, if the airline agrees to inspect the window at regular intervals.
The order applies to some of Boeing’s 757, 767, and 777 models, though the NTSB urged the FAA to include the 747. The FAA may still do so in a future order.