FROM STAFF AND WIRE REPORTS 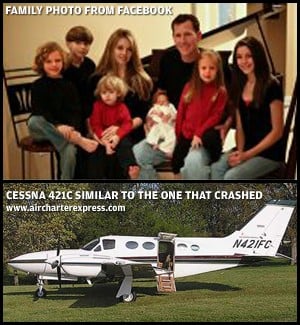 DEMOPOLIS, Ala. • The Florida family of seven that died in a plane crash after leaving a family reunion in St. Louis was related to the owner of discount liquor and cigarette shops.

Fred Teutenberg Sr., best known in St. Louis for the quirky TV slogans for the Dirt Cheap chain is the father of the man piloting the doomed plane — and the grandfather of the five children under the age of 11 who died in the wreckage.
Marengo County, Ala., Coroner Stuart Harold Eatmon identified the victims as Fred Teutenberg, 42; his wife, Terresa, who was in her mid-30s; their daughter Emma, 2; their son Peyton, 4; their daughter Ellie, 6; their son Brendon, 9; and their son Will, 10.
Eatmon said Terresa’s oldest child, 16-year-old Ashlei Bruewer, was not on the plane.

The family lived in Niceville, a town of about 12,000 on the Florida panhandle.
Fred Teutenberg Sr. was at work Monday morning at Fred’s Cheapo Depot on Telegraph Road and not ready to make any public statement, said a family friend answering the phones at the store. He used to run Dirt Cheap stores but parted ways with the owners in 2009 and launched the Fred’s Cheapo Depot stores.
Eatmon, the coroner, spoke to Fred Teutenberg’s father after the crash. Fred Teutenberg Sr. said he had been telling his son to buy a newer plane if he was going to fly with his family, Eatmon said.

“He told his dad the plane had two new engines,” Eatmon said.
On Saturday, the family’s small plane had left from the Creve Coeur Airport in Maryland Heights. It crashed near an airport in central Alabama, the Federal Aviation Administration said.
Marengo County, Ala., Coroner Stuart Eatmon said the couple and their five young children were returning to Florida from a family reunion in St. Louis when the crash happened Saturday night.
The Cessna 421C the Teutenbergs were on had left the Creve Coeur Airport Saturday afternoon en route to the Destin, Fla., airport, in the Northwest Florida Panhandle, the FAA reported.

Shortly before 7:30 p.m. Saturday, the pilot — identified by Eatmon as Fred Teutenberg — radioed authorities that he was having engine trouble and requested clearance to land at the nearest airport, said Elizabeth Isham Cory, an FAA spokeswoman.
The plane was directed to land at Demopolis, about 100 miles west of Montgomery in west central Alabama. It disappeared from radar short of the runway, Cory said.
The wreckage was found 2:17 a.m. Sunday in a wooded area within two miles of the airport. All seven people on board were pronounced dead at the scene.

Eatmon said the plane was upside-down and one of its wings had broken off, apparently as it crashed into trees.
FAA records show the plane is registered to Advanced Integrated Technology Solutions LLC in Niceville, Fla. The software design and development company’s website lists the Teutenbergs as owners.
A profile of Fred Teutenberg on the Linkedin website says he attended the University of Missouri-St. Louis from 1988 to 1991.
Terresa Teutenberg listed herself as a 1991 graduate of Francis Howell North High School on the Facebook website. She had an older daughter who was not on the plane.
Terresa Teutenberg owned Discovery Learning Academy in Bluewater Bay.
“She was an excellent leader and role model. Her work within the school and the community will be greatly missed,” the academy said in a statement issued Sunday.

Friends told The Northwest Florida Daily News that Fred Teutenberg did volunteer work and played bass guitar every Sunday with the church band at First United Methodist Church of Niceville.
“He not only played with our band, he played with other church bands elsewhere,” said Bob Webb, a friend and member of the church. “He told me one time he even toured a while. So he had a lot of interests.”