Residents in Devastated Sendai Survey Damage, Dig Out, Console One Another And Discover Old Friends Amid Survivors 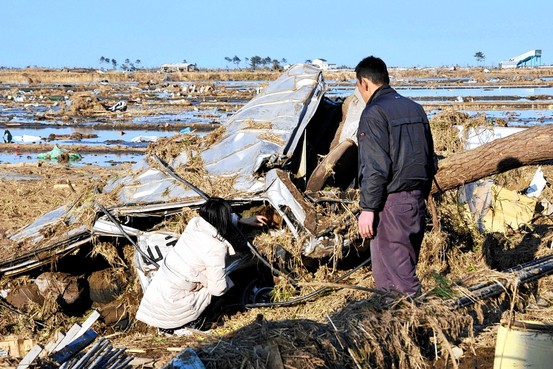 Associated Press Parents on Saturday view the body of their daughter, which they found in a driving school’s courtesy vehicle that was smashed by the tsunami at Yamamoto, northeastern Japan.

SENDAI, Miyagi Prefecture—As the tsunami warnings subsided around Sendai, one of the locations decimated by the giant tidal waves that followed Japan’s earthquake, local residents entered recovery mode.
Outside Sendai on Monday, Hiromi Fudo waited for hours with his wife and hundreds of others at the Maruhon Cowboy supermarket, hoping to get food because their supply of potable water and non-perishable food for six people was running perilously low. Mr. Fudo’s wife was killed by the tsunami.

“My cousin and her child were ok because they were upstairs,” he said on Monday, emotionless. “But my aunt got washed away.”
Hundreds of cars and large parts of the area surrounding Sendai Airport were submerged under water as the tsunami flooded nearby waterways. Stunned locals stared wide-eyed at the damage and consoled one another in the debris-covered streets.
The rushing water swept up small planes. Sheds had floated away into the streets, inhibiting access to roads. A 16-foot-high tunnel running underneath the airport’s runways for about 500 yards was entirely flooded.

Prefectural employees drained the tunnel, and braced for the possibility of finding bodies in the water once they send in divers.
Along the four-lane road leading to the eastern Pacific Ocean coast, which is more than a mile from the airport, there were happy reunions.
“You’re alive. I was so worried,” said one man, hugging another elderly man, before breaking down in tears. Slightly bemused, the older man who was riding a bicycle and still wearing a one-piece mechanic’s jacket from a nearby aviation company said, “An old bastard like me doesn’t die so easily.”
Shinichi Hayasaka, a 34-year-old mechanic at an aviation maintenance company JAMCO Corp., searched franticly for his station wagon that had been washed away from his office parking lot when the tsunami stuck on Friday afternoon.
“I saw another person’s car from JAMCO around here, so I thought it may have carried all the way here,” he said. “At the very least, I wanted to get my valuables out of the car.”
He said once the earthquake struck about 170 people at the company ran to the roof of the office building. There, they watched the waves of water rush toward them. Mr. Hayasaka and his co-workers spent Friday night sleeping on the third and top floor of the building. Women used the available blankets while the men wrapped themselves in cardboard boxes to stay warm.

After the water subsided a bit on Saturday afternoon, about 24 hours after the earthquake hit, Mr. Hayasaka and his co-workers took the inflatable emergency boats from airplanes and paddled to safety.
Outside the door of on one of the buildings at the Aviation Safety College’s Iwanuma Research center, there was a row of tables in the middle of the water from where people had escaped the flooding.

Next to the school, a Japanese Coast Guard helicopter descended onto the roof of its offices near the airport, although it wasn’t clear whether they were rescuing stranded staff or brining additional supplies.
One elderly woman, who asked not to be identified, was on a bicycle looking for her daughter who lives in the area near the airport. Looking around the parking lot of convenience store parking lot covered in logs and metal siding from nearby buildings. She said her daughter had not been reachable since the earthquake hit on Friday afternoon.
Resources in Sendai were quickly running out on Sunday. Lines for gasoline were half a mile long. One reporter waited in line for eight hours to buy gasoline, only to be told by attendants that they had run out by the end of the night with hundreds of cars still waiting. Area residents can only purchase a limited amount of gasoline.
“Today it is only 10 liters per car, tomorrow it will be five, after that, we will just have to say we are sorry,” said gasoline stand attendant Yutaka Naganuma.

Tempers ran short and there were some raised voices, but no violence and for the most part, people have remained calm and orderly.
Traffic lights are not working in the Sendai area. One middle school-aged boy on a bicycle was hit hard by a car. People on the street covered him in blankets and an ambulance arrived within five minutes.
Tadashi Sato, a 39-year-old employee at a construction materials company, was out surveying the damage at his office. He was at home a few minutes away when the quake struck. About an hour after the quake, Mr. Sato said he went to see how the office had weathered the tsunami and the water level was already chest-high. Riding bicycles, Mr. Sato brought his 6-year-old son Haruto to see the devastation.
“It may sound strange, but I wanted him to see this. I want him to remember what happened to his country,” said Mr. Sato. “He doesn’t show that he was scared, but he’s having nightmares when he is asleep.”
—Eric Bellman contributed to this article. Write to Daisuke Wakabayashi at Daisuke.Wakabayashi