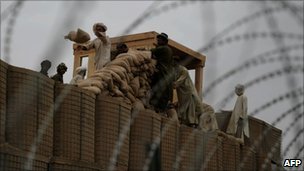 Commanders are instructed to make every effort to award contracts to Afghan companies
The Nato-led International Security Assistance Force in Afghanistan has issued new guidelines for awarding contracts in a bid to stem corruption.
The rules are designed to streamline and increase oversight for billions of dollars worth of contracts for services ranging from transport to food.
Commanders said that without the extra oversight there was a risk of fuelling corruption and financing insurgents.
It is thought about $14bn (£9bn) a year is currently being paid to contractors.
Earlier this year, Afghanistan’s finance ministry said billions of dollars in cash had flowed out of the country via Kabul’s airport.

President Hamid Karzai blamed private contractors for the loss, saying the money had never passed through government hands.
Local resentment The new guidance, issued in an internal memo by Isaf commander Gen David Petraeus last week and obtained by the Associated Press, contains a “contractor’s transparency clause” to improve oversight.
Lead contractors will have to provide a list of all their subcontractors on the project, as well as provide licensing, personnel and banking details. Every contract worth more than $100,000 must now be formally vetted and entered into a database to ensure quality and help prevent fraud.
“Excessive subcontracting tiers provide opportunities for criminal networks and insurgents to divert contract money from its intended purpose,” Gen Petraeus warned in his memo, adding that lead contractors should be held responsible for their subcontractors.

Commanders are also instructed to make every effort to award contracts to Afghan companies. If this is not possible, foreign companies should be encouraged to employ Afghan workers and contractors, the rules say.
“Contracts with a broader range of Afghan companies will help break monopolies and weaken patronage networks that breed resentment [among Afghans],” Gen Petraeus wrote. “In situations where there is no alternative to power brokers with links to criminal networks, it may be preferable to forgo the project.”
Intelligence resources will be used to learn about contractors and subcontractors to determine the effect of each contract on “security, local power dynamics and the enemy”.
“With proper oversight, contracting can spur economic development and support the Afghan government and Nato’s campaign objectives,” Gen Petraeus added.
“If, however, we spend large quantities of international contracting funds quickly and with insufficient oversight, it is likely that some of those funds will unintentionally fuel corruption, finance insurgent organisations, strengthen criminal patronage networks and undermine our efforts.”
Despite the huge influx of foreign funds since the US-led invasion in 2001, Afghanistan remains one of the poorest countries in the world.