SAN JOSE—Later this month, the Transportation Security Administration will begin a formal testing period for a new baggage screening system at Mineta San Jose International Airport. The state-of-the-art baggage-screening system, made by Morpho Detection, could be rolled out to airports across the U.S. if the machines perform well. 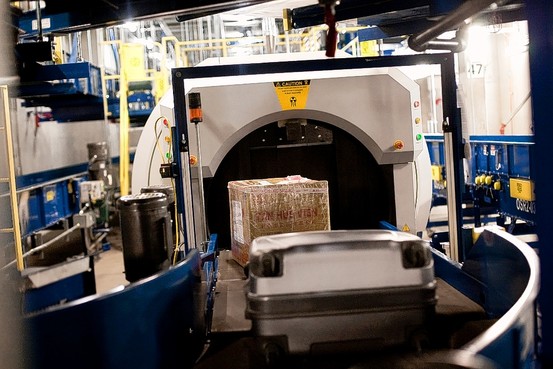 The system is part of a federal initiative to replace older baggage-screening machines in U.S. airports with more efficient and accurate models. After a formal 45-day evaluation period, the agency will determine whether to purchase additional Morpho systems and at which airports they will be deployed, says TSA spokesman Nicholas Kimball.
Since the $45 million system began a trial run in June, some problems have cropped up. Airport spokesman David Vossbrink says software issues led to dozens of lost bags and some delayed flights one weekend in June. In addition, baggage mishandling incidents—for example, when airport employees place a child car seat on a conveyer belt sideways instead of lengthwise—have slowed the system on several occasions, he says.

Overall, Mr. Vossbrink acknowledged there have been glitches in service. Neil Bloomfield, Morpho’s general manager of Americas aviation, adds there have been “teething problems” with the new system. Both say software patches and additional employee training appear to have fixed the problems and that all parties are working together to make sure the system functions smoothly.
Such problems aren’t abnormal when implementing a new generation of machines, said Douglas Laird, a Reno, Nev., airport security consultant. “It’s one thing for a device to work in a TSA laboratory, but it’s quite another for it to work in the real world,” he said.
But minor technical issues can sometimes lead to bigger problems, said Charles Slepian, an aviation-security consultant in Lake Oswego, Ore. “If people are asked to search too many bags by hand because of a little glitch, eventually they are going to get fatigued and stop searching them thoroughly,” possibly letting through items that are actually dangerous, he said.

Mr. Slepian said the logistics of deploying a baggage-screening system are more complicated than installing the controversial full-body scanners that have begun to appear in U.S. airports. The new baggage-screening machines “cost about double if not triple the price of body scanners,” he said. “You’re also talking about shutting down baggage flow during the installation process, so the whole thing is a much more involved process.”
As part of a potential nationwide rollout of the machines, any issues could have repercussions beyond San Jose. Morpho has worked with the TSA to ensure that the equipment would meet the agency’s airport certification requirements, says Morpho’s Mr. Bloomfield.
The new screening system, dubbed the CTX 9800 DSi, was created by the Newark, Calif., security company formerly known as GE Homeland Protection Inc. and now part of privately held Safran Group. The company began developing the machine four years ago and the first units were delivered early this year.

The eight CTX 9800 machines deployed so far, which cost about $1.5 million each, are similar to medical CT scanners, says Mr. Bloomfield. When a passenger checks in a bag at the ticket counter, an airline representative places it on a conveyer belt where it travels to a detection machine. Unlike most baggage-screening systems that create two-dimensional images of objects inside luggage, these machines create three-dimensional images that can be digitally manipulated by personnel when a bag is deemed to be suspicious. The machines also use advanced software to detect suspicious items, says Mr. Bloomfield.
The technology reduces reliance on human observation and interaction with the bags, say Morpho executives. For the majority of bags, employee contact is only required when a piece of luggage is placed on or taken off the conveyer belt, in contrast to older systems that require staff to manually feed each piece of baggage through the detector.

As a result, where San Jose once used 28 machines to process 1,800 bags an hour, the new system will be able to process the same number of bags using eight machines and require fewer employees to supervise the process, says Mr. Vossbrink. The TSA says it is too soon to know what effect the system would have on staffing needs.
The new baggage-screening system are part of a $1.3 billion renovation aimed in part at reducing congestion at the airport. To implement the new baggage-screening system, the airport received a $20.6 million grant from the TSA and $20.9 million in funding from the American Recovery and Reinvestment Act, which together covered about 90% of the costs. The TSA’s Mr. Kimball says it chose San Jose for the pilot program based on an evaluation of its “pre-existing plans, airport readiness, operational suitability and risk.”
The TSA expects to decide later this year whether to move forward with the system.
Write to Marie C. Baca at marie.baca