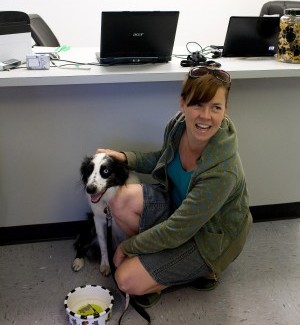 Heather Donahue, of California, leaves her dog Vito at PetAirways in East Farmingdale, New York, Tuesday, July 14, 2009. On the first-ever all-pet airline started by husband-and-wife team Alysa Binder and Dan Wiesel, dogs and cats will fly in the main cabin of a Suburban Air Freight plane, retooled and lined with carriers in place of seats. (AP Photo/Yanina Manolova – File Photo)

Pet Airways has been dogged by delays and remains a St. Louis no-show nearly one year after announcing local plans for pet-friendly air service.
The airline announced last April that its turboprop aircraft would start picking up Paw-sengers in a Lambert-St. Louis International Airport space that was to be outfitted to resemble a veterinarian’s office.

But the St. Louis Airport Authority last fall canceled a three-year lease with Pet Airways for the 9,451-square-foot building space and 8,842 square feet of unenclosed space in Lambert’s Cargo City complex.
Pet Airways, a wholly owned subsidiary of the California-based PAWS Pet Company, Inc., bills itself as the only airline “specifically designed for the safe and comfortable transportation of pets.”

In a December filing with the Securities and Exchange Commission, the airline said it does not “currently generate sufficient cash from our operations to cover our monthly operating costs.” By Dec. 1, the airline said it had $50,000 cash on hand.
Alysa Binder, Pet Airways’ co-founder and chief development officer, said Thursday that Pet Airways has suspended some flights at other airports during the past five months.

Binder said in an email that the airline remains committed to entering the St. Louis market and the schedule for opening here is contingent on additional financing.
Binder said the airline needs to obtain additional financing or be able to tap into a $5 million line of credit it has in place.
On their website, Pet Airways founders Binder and Dan Wiesel — a California real estate developer — said they came up with the idea for the airline after encountering hassles transporting their Jack Russell Terrier, Zoe.

The airline began service in the summer of 2009.
Pet Airways touts itself as an alternative to the legacy commercial carriers, which often relegate larger pets to the plane’s cargo hold. With Pet Airways, pets fly in the climate-controlled cabin of a Beechcraft 1900.
Fares are based on the size of the pet and the distance traveled and average about $500 per flight, the airline said. However, individual flights run from “as little as $99” to more than $1,200.

While the airline caters to all pets, Pet Airways officials said in regulatory filings that its planes carry mostly dogs and cats.
St. Louis was supposed to join its fledgling network of nine market cities, which include New York, Los Angeles, Chicago and Atlanta. The airline reported that it was also going to launch service to Dallas, Houston and Austin last spring.

“Our plans for expansion into these markets has been delayed, however, due to our inability to secure sufficient capital to open such facilities and secure such routes,” the airline said in a December filing to the SEC.
Pet Airways added that it is subject to risks inherent with an “early stage” business in the airline and pet-transport industries. Those include increasing fuel costs, changes in government rules and economic conditions.

Lambert Director Rhonda Hamm-Niebruegge said Pet Airways entered into a $6,740-a-month lease with the airport last July. The airport did not make any improvements to the space.
The airport ultimately canceled the lease in October after the airline fell behind in its lease payments, Hamm-Niebruegge said. The airline still has not paid its outstanding balance of $26,692.

Hamm-Niebruegge said the Airport Authority has not taken any legal steps to recover the rent and she hopes Pet Airways is still able to make a go of it in St. Louis.
In the meantime, the airport is marketing the Cargo City space.
Ken Leiser covers transportation and aviation for the Post-Dispatch. He blogs on Along for the Ride. On Twitter, follow him @kenleiser and the Business section @postdispatchbiz.