By Mail Foreign Service
At least 13 people have been confirmed dead after a plane owned by state-run airline Conviasa crashed in south Venezuela on Monday.
The plane was carrying 51 people when it crashed shortly after take off in the eastern city of Puerto Ordaz at about 10am local time.
Transport Minister Francisco Garces said the plane went down on the property of the state-run Sidor steel foundry. 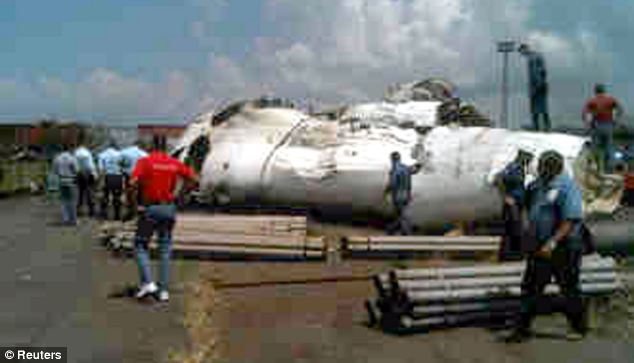 Wreck: This video grab shows rescue workers at the site where the ATR-42 plane crashed in Puerto Ordaz 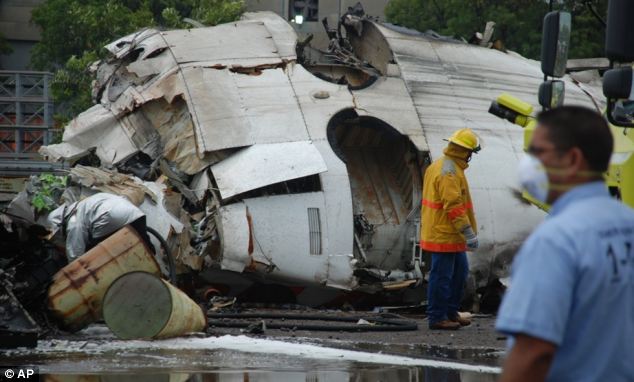 Investigation: The immediate aftermath of the crash. The plane came down just after take off at Puerto Ordaz at about 10am local time

Rescue workers were helping injured victims, an emergency official told Venezuelan. He did not say how many had survived.

Forty-three passengers and four crew members were aboard, Garces said.

Garces said the plane was heading to Margarita Island when it crashed for reasons that were unclear.

Emergency services chief Luis Diaz said the plane had crashed on to property belonging to Sidor, which has a large mill and land near Ciudad Guayana.

He could not give more details.

‘There were 47 people on board, 43 passengers and four crew,’ Garces told state television.

In the last major crash in Venezuela in 2008, a plane belonging to private local airline Santa Barbara with 46 passengers on board crashed into mountains, with no survivors.
ATR, which makes 40-70 seat twin-engined turboprops, is a joint venture between Airbus parent company EADS and Italian aerospace group Finmeccanica.

‘The plane fell on a waste area where they put barrels of unused steel materials,’ governor Gomez added.