Associated Press Crews dig out an American Airlines 757 jet that slid 600 feet beyond the end of the runway on Dec. 29 at Jackson Hole Airport near Jackson, Wyo.

Federal safety officials, saying American Airlines violated long-established “standards of conduct” for aviation-incident investigations, have barred the carrier from participating in a probe of one its jets that ran off the end of a runway in Wyoming last week.
As part of its unusual public criticism of the AMR Corp. unit, the National Transportation Safety Board on Friday said the airline improperly downloaded information for its own use from the flight-data recorder of a Boeing 757 that rolled past the end of a runway at Jackson Hole on Dec. 29. None of the 181 people aboard suffered injuries, but the safety board immediately launched a formal investigation.
Although no data “was missing or altered in any way,” the board said American’s decision to prematurely access the data before turning over the plane’s recorders, usually called the “black boxes,” to federal investigators amounted to a “breach of protocol.”
American’s misconduct violated long-established “standards of conduct” that are “vital to the integrity of our investigative process,” according to Deborah Hersman, the board’s chairman.
As a result, the board barred American Airlines officials from continued participation in the probe.It is the first time in decades that a major U.S. carrier has been kicked off an investigation into an accident or incident involving one of its own aircraft.
View Full Image 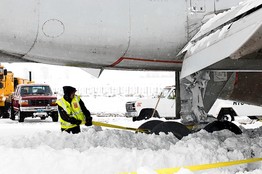 Associated Press None of the 181 people aboard suffered injuries after the 757 airplane slid more than 650 feet off the end of the runway.

The carrier didn’t download any information from the separate cockpit-voice recorder on Flight 2253, which departed Chicago, landed at Jackson Hole in snowy conditions and ended up about 600 feet past the end of the runway. Bulldozers and other pieces of equipment were used to pull the twin-engine jet out of hard-packed snow.

On Sunday, an American spokeswoman said that before delivering the recorders to the government, airline technicians downloaded the data as part of the carrier’s “normal safety investigation” of such incidents.
“There was no attempt to circumvent any collaborative process with the NTSB” or officials of the Federal Aviation Administration, according to the spokeswoman. She also said the airline “has begun an internal review of its procedures” and remains committed to cooperating with government investigators.
So far, neither the airline nor the safety board has indicated specific causes of the incident. Investigators, among other things, will look at the aircraft’s brakes, how far down the runway the plane touched down and whether the strip’s surface was contaminated by snow or ice.
The Jackson Hole Airport has a relatively short runway for handling big commercial jets, and many pilots have long talked about frequent incidents with business jets or smaller planes running off the end of the strip.
Eyewitness reports and an amateur video suggest that the plane touched farther down the runway than would be considered optimal, and its thrust reversers may have deployed later than desired. Such devices, located at the rear of each engine, re-direct thrust and serve an important function in slowing down an aircraft after touchdown.
The investigation also is bound to examine whether winds or visibility issues were factors.In an update issued late last week, the safety board said the pilots told investigators that they saw the runway clearly before touchdown and described the descent as well as the approach to landing as “uneventful.”

Almost precisely a year earlier, an American Airlines Boeing 737 ran off the end of a wet runway at Kingston, Jamaica, after touching far down the strip. Unable to stop with almost half the 8,900-foot runway behind it, the plane barrelled off the strip at roughly 60 miles an hour and broke apart. There were no fatalities.
In a press release last month, Jamaica’s Civil Aviation Authority said all of the plane’s systems operated normally and “deceleration was normal for a wet runway.”
In the wake of the Kingston accident, FAA officials stepped up scrutiny of the airline’s safety practices related to landings in bad weather or on contaminated runways.
Write to Andy Pasztor at andy.pasztor