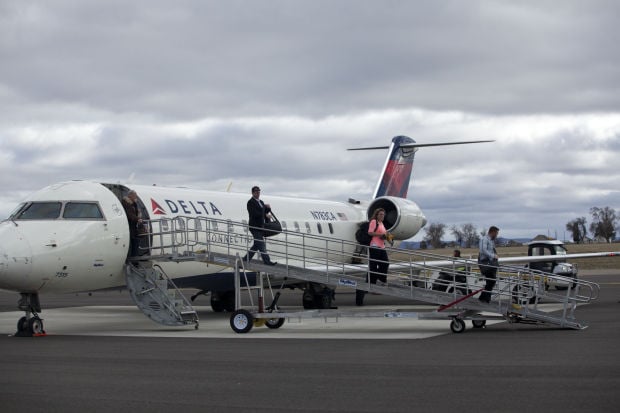 Buy Now
STEPHEN REISS, TIMES-NEWS
Passengers arrive at Joslin Field Magic Valley Regional Airport on Tuesday, Feb. 10, 2015, in Twin Falls  6 hours ago  •  ERIC GOODELL egoodell@magicvalley.com
TWIN FALLS • A $2.9 million remodel of the Joslin Field Magic Valley Regional Airport terminal set to lift off next month will improve the chances of adding future flights, an airport official said.
Airport Manager Bill Carberry said the airport will seek bids for the project in March, with construction expected to begin in May and end in March 2016.
Plans were first announced in July.
“It’s not that if we build it, they will come,” Carberry said of potentially new flights. “But rather if we don’t build it, they most likely will not come.”
About 94 percent of the cost will be paid by the Federal Aviation Administration.
The remainder, expected to be about $171,000, will be divided between the city of Twin Falls and Twin Falls County. That amount would likely come from contingency funds.
Twin Falls City Manager Travis Rothweiler said the amount the city will be required to pay equates to a “phenomenal investment.”
Carberry expects the federal funds to be available when it comes time to build. “The FFA has a full-funding year and so we should be good,” Carberry said. One of the only snags in the plan would be if bids came in significantly higher than expected, he said.
Plans for improvements, which will better equip the airport for security requirements and greater comforts of airline passengers, began a couple of years ago when the airport’s master plan was updated.
The airport identified deficiencies after airport officials complied with mandated security requirements after the Sept. 11, 2001, terror attacks. There is inadequate space for bag screening, Carberry said. And passengers don’t have access to restrooms after passing through the security checkpoint.
Plans call for moving security screening of luggage to a more discrete location, expanding the waiting area for passengers and building more restrooms. The airport also wants to build work areas where passengers can plug in a cellphone and fire up a laptop.
The remodel will also improve circulation in the ticket lobby area, adding a third ticket counter.
With the improvements, “We will be able to move passengers and bags as efficiently as possible,” Carberry said.
The construction will add another 8,000 square feet to the terminals east end. Boise-based architect firm CSHQA designed the plans.
The current terminal was constructed in 1996, replacing one that was built in the 1940s.
Carberry described the numbers of airport passengers flying out of Twin Falls as “fairly level” when compared to last year, with between 70 and 75 passengers departing the terminal on most weekdays.
Skywest provides two flights daily on 50-seat passenger flights between Twin Falls and Salt Lake City.
“We need to continue to add flights and additional carriers to the airport, but we realize that flights coming in will need to be demand drive, so we will try to increase that demand,” Rothweiler said.
In 2010, Allegiant Airlines provided twice-weekly flights from Twin Falls to Las Vegas, but the airline ended the flights in 2011 in what was called an economic decision.
*****************************************
California Aviation Alliance: Airport News List E-mail
Sent by AviaEd@AIM.com – Lorena de Rodriguez on behalf of CAA subscribers. Add your comments to these stories realtime online at  http://aviaed.wordpress.com/.