Surviving security and braving the pat-down 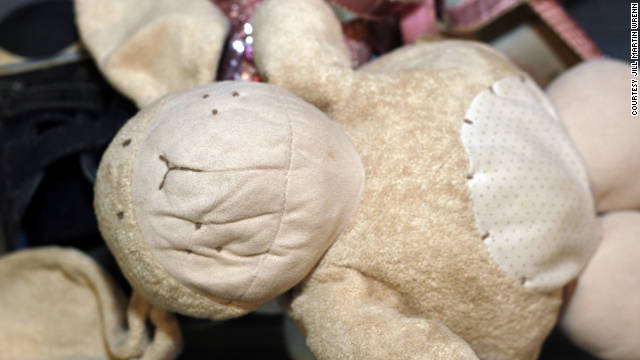 Beloved toys have to go through security separated from their owners. Prepare your toddlers for the screening procedures.

(CNN) — We were running late for a flight from London’s Heathrow Airport when it happened. The security official held up his hand, and shouted for his colleague. A lengthy line of travelers offered sympathetic glances. They knew what this meant.
It was time for a pat-down.
But it was not for me; it was for my 4-year-old daughter.
It was her first. Though young, she is an experienced air traveler. She took her first transatlantic flight when she was 6 weeks old. And she knows the rules: When she arrives at airport security, she kisses her stuffed bunny goodbye, and tells him she will see him on the other side of the X-ray machine.

Bunny had to wait a bit longer than usual for their reunion on this occasion. My daughter was selected for a pat-down because, according to the security officer, she had touched the side of the metal detector.
Had I watched her go through, I might have warned her to keep her hands at her sides. But I was busy sampling my infant son’s jar of pureed spaghetti and tomato sauce, washed back with a sip of baby milk, under orders from a security officer.
“The same rules apply for everybody at the airport,” says a spokesperson for BAA Airports, which operates London’s Heathrow. “Some people are selected fairly randomly for an extra search.”
Search protocols vary between international airports. Certain guidelines, such as restrictions on liquids, tend to be universal, but security rules differ on a country-by-country basis.

For traveling parents, that can mean the difference between having to taste the breast milk they want to bring on a flight vs. merely holding the liquid under a test strip.
But even with a surprise taste test, staying calm is key. Getting anxious will only make the process more stressful, says travel expert Pauline Frommer, series editor for the Frommer’s guides.
“Kids are very sensitive and they pick up that vibe,” she says. “What parents need to realize is, it’s not going to be as bad as they think.”
Even with a pat-down, the airport security process will probably only take about 15 minutes out of a trip. And young travelers can be resilient, often more resilient than their parents.

To my surprise, my daughter submitted happily to her pat-down. She saw it as an adventure, especially when she realized that her parents were standing by during the procedure (per airport protocol).
And many of the world’s busiest airports are taking steps to make security more family friendly. In the United States, the Transportation Security Administration is in the process of making pat-downs less likely for children. Passengers who are younger than 12 will be allowed to pass through the metal detector more than once rather than getting patted down immediately after triggering the alarm.
“These modified procedures offer options to greatly reduce — but not eliminate — a pat-down for children 12 and under,” says TSA spokesman Greg Soule. Under the new guidelines, the younger travelers also will be able to keep wearing their shoes instead of sending them through the X-ray machine.

Officials at London’s Heathrow recently met with a group of mom bloggers, in response to online criticism of the airport’s restrictions on traveling with breast milk.
“This prompted us to think about ways we could improve the experience of people traveling with babies …” a BAA spokesperson wrote in an e-mail, “… and we thought that getting the views of a selection of mummy bloggers would be a good way of doing this.”
No matter the airport families are passing through, these expert tips should help streamline the security process:

Review restrictions: If a passenger plans to bring breast milk, formula or other baby-related liquids for the flight, check the online guidelines of the TSA, or the international airport operator. “Be aware of the rules and it will go much more smoothly,” says Frommer.
Arrive early: Make sure to leave plenty of time at the airport to allow for security surprises, or other unexpected delays. “There is nothing worse than trying to run to catch an airplane,” says Lauren Goldenberg, owner of the Family Traveler agency, especially with toddlers in tow. “You just never know when those lines will get long,” she says.

Pick the right lane: Many airports offer security lines earmarked for travelers with young children, who will need extra assistance. “They really help cut down on the time standing in line,” says Anne Taylor Hartzell, Editor of HipTravelMama.com, “… and separate you from business travelers who may be less patient with you struggling to close your baby stroller.”

Preview the process: “The best thing is to prepare the children for what’s going to happen,” says Goldenberg. Warning your young traveling companions in advance that their toys will take a trip through an X-ray machine could avoid an unpleasant surprise.

Free your hands: “A baby carrier saves a lot of time,” says Hartzell. Traveling families often have strollers, car seats and other bulky items. Trying to get the gear through the X-ray machine while shepherding young children through the metal detector, can be a challenge. Putting a baby in a carrier attached to a parent leaves hands free for luggage — and for keeping toddlers from running amok.

Share the load: Families with two adults can divide and conquer. One can supervise the children while the other folds the stroller and gets the bags through the X-ray machine. Parents who are flying alone can ask their airline about getting a gate pass for a friend or family member who can help. And children can carry their own weight, if they have a small bag. “I find it’s great even at a young age if children have their own,” says Goldenberg.

Keep calm: “Don’t your let your anxieties translate to your children,” advises Frommer. “That’s when the meltdowns happen.” If you lose your cool, your children probably will, too.