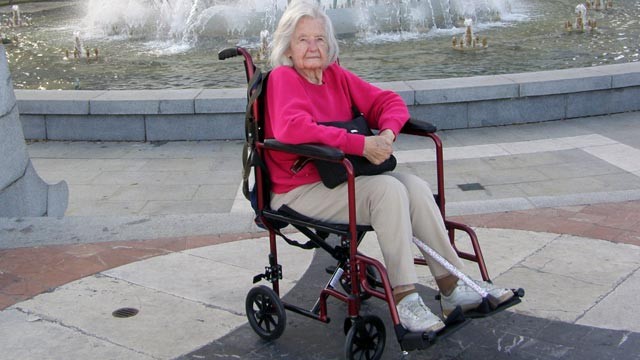 Lena Reppert seen in this 2010 family photo was allegedly forced to remove her adult diaper by TSA agents in Florida. (Courtesy Jean Weber)

A woman who objected to airport screeners she claims insisted that her ailing 95-year-old mother remove her adult diaper claimed today that airport security then insisted that the daughter also undergo frisking, which prevented her from escorting her mother to the plane.
Jean Weber of Destin, Fla., said the Transportation Security Administration lied when they issued a statement today denying that they demanded Weber’s mother, Lena Reppert, remove her diaper so a thorough body search could be conducted.
Reppert, who weighs 105 pounds and suffers from leukemia, was at Northwest Florida Regional Airport on June 18. Her daughter brought her to the airport so that her mother could travel to relatives in Michigan who were going to care for her.
Having her mother endure such an embarrassing search upset Weber.
“I was in tears, just sobbing,” Weber told ABCNews.com today.

Weber said her mother was “stoic” throughout the ordeal that lasted about an hour and says the elderly woman remained calm. The search began in a glass cubicle next to the security line, but was moved into a private room.
Weber says her crying, however, triggered another alarm and a suspicious behavior specialist was brought in due to her emotional response.
TSA Defends Frisking 95-Year-Old Woman
“They stood me up and patted me up and down and all over,” Weber says.

A TSA spokesperson said the agency could not comment on the cirumstances of this particular situation, but said the TSA does have behavior detection officers. However, “The TSA would not indicate [to a
passenger] what behaviors would trigger and necessitate behavior detection officers to take further action such as additional screening,” according to the spokesperson.
Weber says the agents were respectful and acting by the book, but questions their common sense.
“My reaction was, ‘Do you people have any common sense?'” Weber says. “There’s no way my 105 pound frail mother can be a threat to national security. That’s insane.”

Greg Soule, a spokesperson for the TSA , says in a statement: “In no instance would our officers ask a passenger to remove an adult diaper. Various options to proceed through the checkpoint were presented to the passenger and her daughter during private screening.”
Soule says the TSA will not disclose further details out of respect to the passenger’s privacy.
Weber calls the TSA’s claim about not removing the diaper “a lie.”
Though she is not wheelchair-bound, Reppert was using a wheelchair due to her instability without her cane or walker. While going through security, Weber says a TSA agent conducted a pat-down and felt something suspicious that they believed merited further inspection.

Weber told the agents she did not have an extra diaper with her, but complied with the request to remove it, leaving her mother without protection.
The TSA is standing by the conduct of their officers. “We have reviewed the circumstances involving this screening and determined that our officers acted professionally, according to proper procedure and did not require this passenger to remove and adult diaper,” the TSA statement said.
After Reppert was finally cleared by security, Weber says she pleaded with officers to take her mother to the plane that was just minutes from departing.
“I kissed and hugged her,” Weber says, before agents took her mother to the gate, leaving her behind at the gate still in security. “I didn’t know if I’d be able to see my mom after this.”