US has 55 daily encounters with “suspected terrorists” 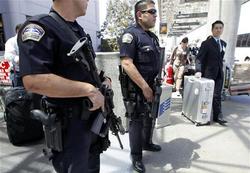 Wed, May 16 2012
By Mark Hosenball
WASHINGTON (Reuters) – U.S. law enforcement and homeland security personnel face an average of 55 daily encounters with “known or suspected terrorists” named on government watchlists, U.S. officials told Reuters.
The figure – which equals more than 20,000 contacts per year – underscores the growing sweep of the watchlists, which have expanded significantly since a failed Christmas Day 2009 bombing attempt of a U.S. airliner. But officials note that very few of those daily contacts lead to arrests.
Civil liberties groups question the use of watchlists, and they have been ridiculed for ensnaring innocent citizens.
U.S. officials said the encounters, which involve airport and border security personnel as well as federal and local law enforcement officers, are reported to the Terrorist Screening Center TSC.L, an interagency unit led by an FBI official based in a tightly guarded building in northern Virginia.
At its headquarters, the TSC operates a 24-hour command center, resembling something from a Hollywood thriller, complete with giant wall-screen projections and signs flashing “SECRET.”

Officials said that when a law enforcement or homeland security officer in the field stops a person whose name matches a name in the TSC’s databases, the officer is supposed to phone the TSC command center for instructions. Based on information in the databases, the TSC then will advise the officer in the field how to proceed, which could range from releasing the suspect to calling in federal officers as backup.
The command center gets between 100 and 150 inquiries a day, of which an average of 55 involve individuals who turn out to be listed on one of the federal watch lists, officials said. Of those calls, about 60 percent come from federal officers at border or airport security posts; the rest come from local police.

“There are incidents every single day,” said TSC director Timothy Healy.
The watchlists include the best known “no fly list” as well as a “selectee list” of people who the government thinks should get extra screening or questioning before being allowed to board an airplane.

Officials acknowledge that the number of names on these lists – and particularly the no-fly list – have grown considerably since Christmas Day 2009, when a Nigerian-born militant who was listed in a classified database called TIDE, but not the no-fly list, successfully boarded a US-bound aircraft but then failed to detonate a bomb which Yemeni militants had helped him stash in his underpants.
Before that incident, the number of names on the no-fly list was around 4,000. U.S. officials said it now contains about 20,000 names while the selectee list contains another 18,000.
A new threat to aviation security surfaced earlier this month, in the form of a foiled plot by al Qaeda’s Yemeni affiliate to deploy a more sophisticated “underwear” bomb.

The watchlists have been the subject of controversy – most recently last week when an 18-month-old girl and her parents were taken off a JetBlue flight when the toddler’s name appeared on a no-fly security list, apparently the result of a computer glitch.
While the U.S. government has instituted measures to enable people to petition for their names to be deleted, officials insist that over time the lists have become more accurate.
Watchlisting officials say that airlines maintain their own lists of potentially troublesome passengers; often, they said, when a well-publicized case arises of a prominent or innocent person being denied boarding, it is because the air carrier, rather than the government, misconstrued the identity of someone on its proprietary lists.

But Nusrat Choudhury, a lawyer for the American Civil Liberties Union, said her organization is pursuing legal action on behalf of people who have unjustifiably been restricted from flying. She said redress mechanisms maintained by the government are at best “ineffective.”
Two or three of the inquiries per day turn out to be people listed on the “no fly” list, the most restrictive of the watchlists maintained by the TSC.
A suspect’s name is put on the “no fly” list if they are deemed by government experts to be a threat to aviation, to be planning an attack or if they are “operationally capable” and are known to be planning to attend, or to have already attended, a militant training camp.
Fewer than 500 of the individuals on the no-fly list are U.S. citizens, officials said.
(Editing by Cynthia Osterman)