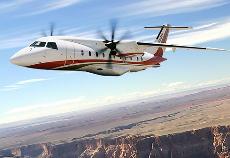 Little-known Vision Airlines is set to expand its profile by adding scheduled passenger service in major markets. The effort will begin this December when it launches regularly scheduled flights between Atlanta and Louisville, Ky.
Since Vision’s founding in 1994, it has offered mostly charter service, though its first foray into scheduled passenger service began several years ago with leisure flights out of small airports in Nevada and the Desert Southwest.

Now, Vision has its sights set on adding regularly scheduled service at Atlanta — the world’s busiest airport — as well as at Louisville and other bigger markets in the Southeast.
“It’s the logical next step for us,” David Meers, Vision Airlines’ senior vice president, tells Today in the Sky. “We believe there are going to be big opportunities for Vision to fill gaps in the market. We think there is a significant business opportunity for us going forward.”
PRESS RELEASE: Vision Airlines announces low-fare service between Louisville and Atlanta (PDF file)
The company — which received a jolt of publicity in July when one of its planes flew alleged spies nabbed by U.S. authorities to Vienna as part of a Cold War-esque exchange with the Russians — will now try to muscle its way into the ultra-competitive sector of scheduled passenger service in large and medium-sized markets.
Its first route in that effort begins Dec. 13, when Vision will begin flying two daily round-trip flights between Atlanta and Louisville on 32-seat Dornier 328 turboprops.
Meers says the company picked the route because it’s a high-fare route on which consumers are clamoring for a lower-fare option.
“As a native of Louisville, I can tell you how expensive it is to get to Atlanta,” he says to Today in the Sky.
Vision’s one-way fares between Atlanta and Louisville will begin at $99 each way (plus taxes and fees) and top out at $199 each way (plus taxes and fees).
Vision’s tickets are now on sale, both via a toll-free number (1-877-FLY-A-JET begin_of_the_skype_highlighting 1-877-FLY-A-JET end_of_the_skype_highlighting) and on its website. The airline’s $99 fares appeared to be available on most flights.
By comparison, a Thursday evening search on Kayak.com showed fares on Delta — the only nonstop carrier currently flying the route — starting at $328 one way for flights on Dec. 13.

A nonstop walk-up fare between Atlanta and Louisville was going for $433 one-way, based on a Thursday-night search on Kayak.
For its part, Delta — which lists nine daily round-trip flights on the route for December — tells The Atlanta Journal-Constitution its service still gives customers more options, as well as access to its large frequent-flier program.
“We’re essentially connecting Louisville to 300 cities with those patterns,” Delta spokesman Kent Landers says to the Journal-Constitution. “No competitor can match the global access we bring to Louisville.”
To make a dent on the route, Vision is counting on a number of big corporations that have significant operations in both Atlanta and Louisville, such as UPS and Home Depot.
Meers thinks Vision can siphon of some of those corporate customers since its fares will be lower than what Delta is currently charging.
But while Vision sees a chance to make inroads with corporate customers on the Atlanta-Louisville run, its strategy elsewhere will focus on leisure travel.

Vision was founded in 1994 as a tour company that specialized in tours of the Grand Canyon. The company has since grown, finding a niche both in leisure-oriented charter service and with contract flights for the U.S. government.
Now, Meers says Vision can expand its portfolio by growing its regularly scheduled service routes to bigger markets. He cites Las Vegas-based Allegiant as a company Vision could possibly emulate.
“It’s hard to ignore Allegiant’s success,” Meers says, noting that the Las Vegas-based carrier has become the nation’s most consistently profitable carrier. He points out Allegiant has been able to earn money by connecting “grossly underserved markets” to popular leisure destinations.
“We like their business model,” he adds.
Customers will get a chance to see what types of markets Vision has in mind this December, which is when Meers says “you’ll hear a lot about our expansion plans.”

He says the carrier expects to announce a “fairly significant” growth plan that will add up to a dozen new cities, with various point-to-point routes among them. Vision does not plan to operate a hub-and-spoke operation focused on connecting passengers.
When pressed on where the carrier might fly, Meeks says “it’s reasonable to assume it will be to typical Florida leisure destinations,” though he didn’t rule out other “underserved” markets in the region.
And, for those worried Vision’s regularly scheduled passenger service might not have staying power, Meers points to the company’s history and diverse business model that includes charter and government contract flights — all served by a fleet that ranges from Boeing 767 and 737 jets to the Dornier turboprops.
“We’re not betting the farm on Atlanta-Louisville,” Meers says
“Unlike other start-ups, Vision Airlines has been in business for 16 years; it is a financially solid company,” adds Bryan Glazer, a spokesman for the carrier. “For these reasons, Vision Airlines is going to be able to spread its wings and compete while it bolsters its brand and creates its route system.”
Posted Oct 8 2010 7:23AM